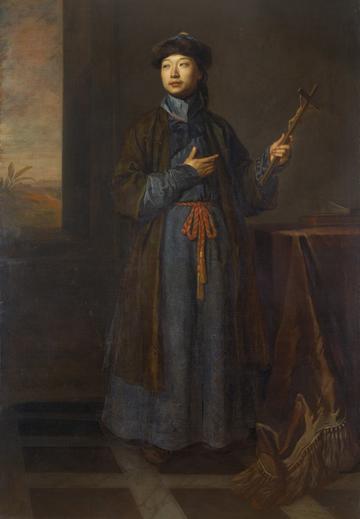 Shen Fuzong may not have been the first Chinese visitor to Oxford, but he was arguably the first to leave a significant lasting legacy to the institution – and the most visible, thanks to Sir Godfrey Kneller’s 1687 portrait of him entitled The Chinese Convert. As the painting’s title implies, Shen’s time in Oxford was facilitated by his having converted to Christianity earlier in his life and represented just one period in the nearly eight years he spent travelling across Europe.

Shen was in England in 1687-88, mostly based in London, though he spent just under two months in Oxford during the summer of 1687. During that time, he was hired and hosted by the Bodleian Library to create a catalogue of the Chinese-language texts in its collection. While here, he struck up a friendship and worked closely with Thomas Hyde. Hyde was Bodley’s Librarian – head of the library – and an influential scholar in ‘oriental studies’ who went on to hold significant chairs at the university.

When we talk about European relations with China during this period – particularly when it comes to things like science and religion – the focus has invariably tended to be on Jesuit activities in imperial China, especially those relating to the imperial court undertaken by figures such as Matteo Ricci. Shen Fuzong’s story was of course to some extent intertwined with these things but is a striking reminder that these relations were complex and ultimately mutually influential.

As William Poole has noted, the letters exchanged between Shen and Hyde are the earliest surviving example we have of sustained scholarly correspondence in the Anglo-Chinese context. This correspondence, and Shen’s travels around Europe, during which he also met the likes of Louis XIV at Versailles and Innocent XI in Rome, emerged out of and drew on religious and imperial circuits and networks. But this is not really an example of European influence in China, but of influence flowing the other way – an example of a Chinese person utilising these networks to spread knowledge about China and to pursue academic exchange in areas of his own interest. 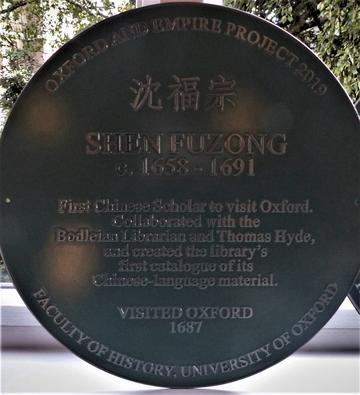 Shen was born in Nanjing during the early decades of the Qing Empire while the Shunzhi Emperor was on the throne. While the Jesuits had not always successfully navigated the tricky political and military terrain of the Ming-Qing transition, the Shunzhi Emperor, the Qing’s third ruler had a generally positive relationship with Jesuits, particularly when it came to astronomy. Shen Fuzong was neither a member of the court, nor as far as we know did he take part in the examinations system. But he was clearly both highly educated and well-regarded by foreign scholars who came in contact with him while in Europe, such as Robert Boyle, with whom he corresponded and met while in London.

Shen’s European travels started in the Spanish Netherlands in 1683, accompanying Phillippe Couplet, a Jesuit whose mission to China was located near Shen’s home of Nanjing. Shen then travelled with Couplet (known in China as Bai Yingli 柏應理) to Paris and Rome. Shen arrived in England during the spring of 1687, spending a few months in London before accepting Thomas Hyde’s invitation to come to Oxford. The Bodleian Library had Chinese-language material in its collection from its earliest days, with 1604 marking its first datable accession. It was thanks to Shen, with his knowledge of both classical Chinese and Latin, that the library got its first proper catalogue of this material. Alongside this formal work, Shen and Hyde discussed a wide range of subjects of mutual interest such as mathematics. Crucially, as part of these discussions, Shen spent time teaching Hyde about the Chinese language as well.

Through all of these activities Shen not only had a significant impact on Thomas Hyde’s future work at Oxford but also dramatically deepened knowledge about the Bodleian’s Chinese collection. All of us who have used the Bodleian's Chinese-language collections owe Shen Fuzong for his work for the Bodleian. So, too, do all of us at Oxford whose studies or research focuses on China and his influence on Chinese Studies here.

William Poole has written far more detailed discussions of Shen’s time in Oxford, his relationship with Thomas Hyde, and his impact on English Sinology. His work includes:

‘The Chinaman and the Librarian: The Meeting of Shen Fuzong and Thomas Hyde in 1687’ (lecture for the Oxford Bibliographical Society); and

A succinct but broad overview of Shen’s life can also be found in: