Cornelia Sorabji was the first Indian woman to study at the University of Oxford. She was born born in a Christian Parsi family in Nasik, India. Her father was a Christian reverend, who was a strong advocate of women’s rights to receive degrees from the University of Bombay (Mumbai). Her mother had been adopted and raised by a British family and throughout her life helped establish several girls' schools.

Sorabji first studied at Deccan College, and gained a first in her finals, which would normally have entitled her to a Government of India scholarship to pursue further studies. Yet, because she was a woman, she was denied the funding. In 1888, in order to be able to gain higher education, she successfully applied to the National Indian Association for financial support, and in 1889, she came to England to study Medicine at Somerville College, Oxford. She was only able to do so because of recent reforms coming from within the University, which allowed for a significant widening of the student body. In 1871, the University Test Acts were passed that allowed non-Anglican students - and ultimately, women as well - to enroll at the University of Oxford. Somerville College, alongside Lady Margaret Hall, was one of the first institutions to open for women, but it was also a more liberal and non-denominational college. Cornelia Sorabji was among the 49 Indian students who matriculated in between 1871 and 1893, the largest foreign student group. For Indian students, British qualifications were essential for jobs in the governement, as well as professions in medicine, the law, engineering, or teaching. 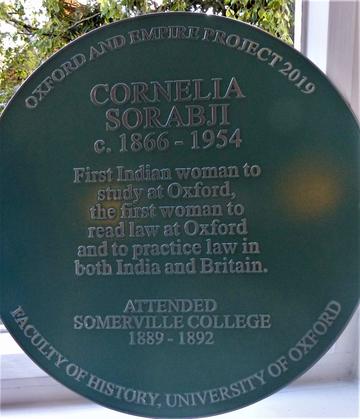 Sorabji eventually quickly changed her degree from Medicine to Law, as her upbringing had exposed her to the complex entanglements of legal limits and traditions which weighed on women in India. More specifically, she wanted to get a law degree to be able to help the the purdahnashin (women confined to their house behind the purdah, and secluded by religious and social customs). As the only Indian woman student at Somerville College, Cornelia Sorabji was granted some special privileges, such as having a fire in her accommodation, but this also brought her unwanted attention, as she experienced patronizing tutors and sneers.1 She recalled that ‘old ladies were always trying to convert me’; when she told them that she was already a Christian their reaction was that she looked ‘so very heathen’.2

In 1892, she was allowed to take the Bachelor in Civil Law exam, becoming the first woman to do so. However, as women could not matriculate as full students at the University of Oxford until Ocotber 1920, she could not graduate with a degree. She was also the first woman to ever be admitted as a reader at All Souls’ Codrington Library.

Sorabji returned to India in 1894 and became involved in legal, social and advisory work for women with property cases, more specifically on behalf of the purdahnashins, as these women, sometimes owning considerable properly, could not access legal expertise to defend it, as they were secluded from the outside male world. In 1904, she became an official Lady Assistant for the court of Bengal, and in the next two decades, records show she defended over 600 women, oftentimes pro bono. Sorabji was an ambivalent supporter of the campaign for Indian Independence, and her political opinions were closely tied to the opportunities for women’s rights, especially when it came to marriage, access to education, and suffrage. In 1930 she returned to live in Britain, where she died in 1954, at the age of 88 years old.

In 2016, the Cornelia Sorabji Law Programme, based at Somerville College’s Oxford India Centre for Sustainable Development, was launched to support law students from India.  You can read more about the programme and its scholars here.

1 Until the arrival of Bamba and Catherine Duleep Singh in 1890 (source: Somerville College).

'Spotlight on the Cornelia Sorabji Scholars', by Somerville College (2019).