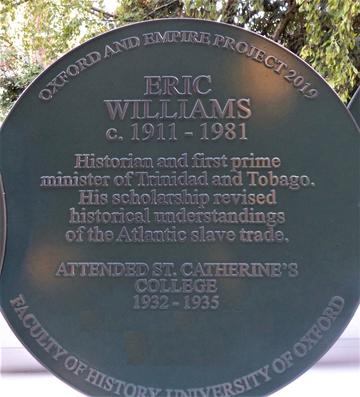 Dr. Eric Eustace Williams (b. 25 September 1911 d. 29 March 1981) led Trinidad and Tobago to independence and became the first Prime Minister of the country in 1962. He remained in this position until his death in 1981. As head of the Government of Trinidad and Tobago since 1965 however, Dr.Williams was not only influential in early developments of the country but also in the wider Caribbean region. He made foundational contributions in efforts towards Caribbean integration, namely the West Indian Federation, Caribbean Free Trade Association (CARIFTA), and the Caribbean Community (CARICOM). Even more significantly, Dr. Williams is perhaps best remembered globally for his scholarly contributions as an Oxford-trained Caribbean historian. He studied at St. Catherine’s College, Oxford where he completed a B.A. in 1935 and later a DPhil in History in 1938. His most influential work, Capitalism and Slavery, first published in 1944, stemmed from his DPhil Thesis, entitled 'The Economic Aspects of the Abolition of the Slave Trade.' The transition from thesis to publication occurred while Dr. Williams was based at Howard University in Washington D.C. as Assistant Professor of Social and Political Science. Capitalism and Slavery, with its several major theses and sub-theses, opened up the study of connections between slavery, the Atlantic Slave Trade, and its impact on European economies.  It inspired debates that persist to the present day. Even one of the book’s fiercest critics, historian Seymour Drescher, categorises the book as a classic, noting that “if one criterion of a classic is its ability to reorient our most basic way of viewing an object or a concept, Eric Williams’s study supremely passes that test.”

As a native of Trinidad and Tobago, I naturally turned to Dr. Eric Williams as I became

interested in history. Reading Capitalism and Slavery helped me to develop a passion for history and for conducting my own historical research. Through his work on a relatively distant past, Dr. Eric Williams caused a generation of  Caribbean peoples to cherish and feel motivated by their heritage. In the same vein, I hope to encourage Caribbean peoples to appreciate the significance of having a better understanding of their history, with the aim of inspiring greater regional pride and empowering them to forge a stronger future in the region for those to come.

Dr Dexnell Peters is the Bennet Boskey Fellow in Atlantic History (Exeter College) at the University of Oxford.