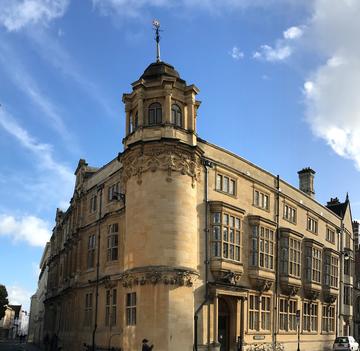 The Indian Institute stands grandly on the corner of Broad Street and Catte Street in the heart of the city of Oxford. Its walls are decorated with tigers, lions, elephants, and Hindu gods, reflecting its original purpose for the study of India. The building currently houses the Oxford Martin School, an interdisciplinary research and policy unit that is housed within the Social Sciences Division of the University of Oxford. The Oxford Martin School supports research that will “innovate and find solutions to the most pressing global challenges” of the present. James Martin, who helped to establish the Oxford Martin School, believed that through research, innovation, and collaborative mindsets, “we can make any kind of world we want.”[1]

This philosophy reflects a similar goal for the building from over a century earlier. At the time, Great Britain governed vast portions of the world through its empire; one of its most important imperial holdings was the Indian sub-continent. It had a vested interest in promoting research into and academic knowledge of India; as one nineteenth-century Anglo-Indian scholar claimed, “there was little study of India in terms of language, literature, customs and religions, unlike with Natural Science.”[2]

The solution was to build an institute specifically for the study of India. The project was first launched in 1875 by Sir Monier Monier-Williams, the Boden Professor of Sanskrit at the University of Oxford. Merton College sold the land where it is presently located to the University and a sum of £20,150 was raised by Monier through public subscription to create the Indian Institute Endowment Fund. 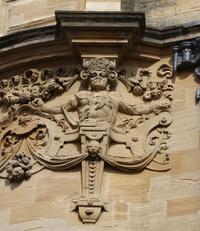 There were 450 subscribers to the fund, including Queen Victoria and the Prince of Wales. Notably, numerous Indian princes and high-status Indian families subscribed as well. More funding came from the Government in the form of grants from the India Office and the Burma Office. Oxford University agreed to provide £250 per annum towards the running costs.[3]

The fund was still insufficient to complete the museum and the library, so it was hoped that those “who have benefited from India” would become benefactors. The Prince of Wales made a public address to appeal for more funds, emphasising how the Institute would “be of great utility to our vast empire in the East.”[4]

Eventually more money was forthcoming from the University for the building and it was consequently taken over by Oxford University in 1884, with a panel of curators who oversaw its activities. The Indian Institute provided both a means for studying the languages, history, culture, and laws of India, as well as a central training location for the Indian Civil Service candidates who were attending Oxford. Between 1878 and 1885 there were 255 candidates selected by the British Government for the Indian Civil Service and 161 attended Oxford.[5]

India attained independence from the British Empire in 1947 and as a result the Civil Service training scheme was abolished at Oxford. Additionally, the funding stopped coming from both the India Office and the Burma Office. The university controversially appropriated the building in 1965 for another purpose, despite the requirements of the original donations and sale of the land to maintain the institute.[6] It hosted the Faculty of History Library for many years before a large donation from James Martin founded the Martin School in 2005.[7]

[7] The Faculty of History moved in 2007 to George Street and the renovations for the Martin School were completed in 2013.