Kofoworola Ademola (nee Moore) wrote in her autobiography that she was often regarded as a ‘curio’ as she walked the streets of Oxford, socialised with friends and had tea with ladies who invited into their homes the first African they had ever met. She concluded that it would be best if “there could be at least two African girl scholars in Oxford each year”. Born in Lagos, to a prominent Yoruba family, Kofoworola (Kofo) Moore dreamed as a child of becoming a teacher and spent the whole of her life working to ensure that women and girls had access to education and possessed the confidence to engage in their 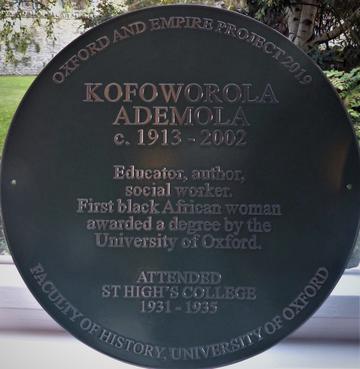 intellectual passions just as men did. A scholarship to Oxford (1932-35) placed her at St Hugh’s College to study English. She is not widely known, but is acknowledged here, as the first African woman to graduate from Oxford University. This proved to be only the beginning of her lifelong commitment to learning, teaching, writing, and women’s causes. She returned to Lagos and married a Cambridge graduate, the former Chief Justice of Nigeria, Adetokunbo Ademola. She founded several girls’ schools and continued to teach or serve as head mistress. Her tireless work with women’s organisations and her work with the Red Cross, resulted in her being made a Member of the Order of the British Empire (MBE) in 1959, an honour bestowed upon her by the Queen Mother. Lady Ademola continued to write and to educate into her final years, most notably through her authorship of children’s books until her death in 2002 at the age of 89. Kofoworola Ademola may be remembered here due to her path-breaking journey through Oxford. This, of course, was only one facet of her passionate commitment to education. At Oxford University today, we welcome African women scholars in much greater (still not enough) numbers. They pursue degrees in medicine, the sciences, and the humanities; as Rhodes Scholars (and founding members of Rhodes Must Fall) or by other initiatives the University is still struggling to found. Kofo Ademola could not have predicted her important legacy, but we can name her here to ensure that her voice continues to be heard.

This summary is based in part on biographical notes from Pamela Roberts, Black Oxford: The Untold Stories of Oxford University's Black Scholars (2013). 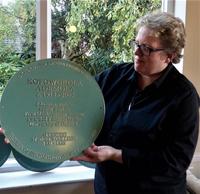 Dr Sloan Mahone is Associate Professor of the History of Medicine at the University of Oxford; she specializes in the history of psychiatry and the psychological sciences in Africa.