Mamoun Ahmed Abdel Wahab Beheiry was born in October 1925. He was raised in Wad Madani, the capital of the Al Jazirah state in east-central Sudan, and the centre of a cotton-growing region. Between 1914 and 1922, the Sultanate of Egypt (including modern-day Sudan) was a part of the British Empire; after 1922, the region was at the heart of a contest between the newly independent Kingdom of Egypt and the British Imperial forces, finally becoming independent on January 1st, 1956. 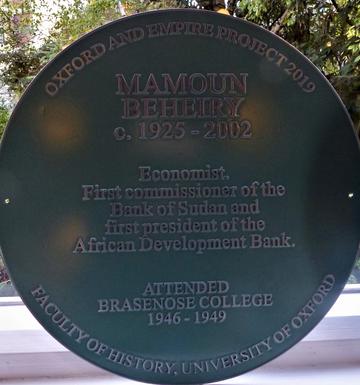 Growing up during these divisive decades, Mamoun Beheiry attended Wad Madani's primary and intermediate schools, and pursued higher education by going to Britain. In 1946, he became a student of Brasenose College at the University of Oxford. Mamoun Beheiry graduated by with B.A. (Hons.) in Philosophy, Politics and Economics.

This made him one of the first African Ministers to seek an education outside of the African continent, starting a tradition that lives up to this day. In 1959, only ten years after graduating from Oxford, Mamoun Beheiry become the first commissioner of the Bank of Sudan. He also became the first president of the African Development Bank in 1964. Gaining increasing international recognition, Mamoun Beheiry became the Minister of Finance of Sudan, and was the first person to be elected twice for this office.

Beiheiry died in August 2002, and following his death, the Mamoun Beheiry Center for Economical and Social Studies and Researches in Africa was established in the Sudanese capital of Khartoum, with the goal of promoting research on economic and social development in Africa.

His life and education offer one among many examples of the strong links between the University of Oxford and the political world, within and especially outside of Britain, in the aftermath of the decolonisation of the British Empire.