Monuments and Memorialisation: Lessons from Russia and Central Asia

Alexander Morrison offers some reflections on historical monuments and memorialisation based on his expertise in Russian and Central Asian History.  The original version of this article, in various Central Asian languages, appears on the Radio Free Europe / Radio Liberty website.

On Tuesday 9 June 2020 in Oxford more than a thousand people gathered to demand the removal of a statue of the imperialist Cecil Rhodes, who made one of the largest bequests the University of Oxford and Oriel College (on whose facade the statue stands) have ever received. The money was made through his mining empire in South Africa, in which African labourers toiled in appalling conditions, while he was also responsible for creating new British colonies in Southern and Northern Rhodesia and expropriating land from hundreds of thousands of Shona and Ndebele to make way for white settlers. His statue at the University of Cape Town has already been removed after protests in 2015; it now looks as if Oxford will follow. 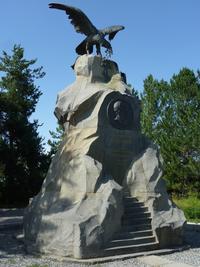 This removal of monuments from the past is a new phenomenon in the Anglophone world, but for the former USSR it is wholly familiar: the Bolsheviks were political iconoclasts, purging the landscape of many reminders of the Tsarist past: some of the most memorable sequences in Eisenstein’s October (1928) involve a crowd tearing down a statue of Tsar Alexander II. De-Stalinization under Khrushchev involved a similar purging of reminders of the ‘cult of personality’, including Stalin’s mummified corpse, numerous statues and re-edited films. Since 1991 many more statues have been toppled, including – as Simon Schama reminds us – one of Felix Dzerzhinskii, founder of the Cheka, which once stood before the Lubyanka, headquarters of its successor the KGB.
Schama puts this forward as an argument for also toppling Rhodes, but fails to note that the removal of Dzerzhinskii changed nothing except the acronym: the KGB is now the FSB, but it still sits in the Lubyanka, and its control over the Russian state has intensified under the rule of self-identified Chekist Vladimir Putin. Dzerzhinskii’s was one of the few Soviet monuments to be removed spontaneously in the wake of the attempted putsch of August 1991. Most of those that followed were taken down as part of the Yeltsin regime’s project of re-legitimation. The appetite for toppling Soviet statues slowed by the end of the 1990s, and was never matched by any corresponding urge to commemorate the many victims of the Soviet regime, or indeed to completely open the archives of repression. Even today the number of memorials to the Gulag or the terrible state-made famines of the Stalin era in Russia can be counted on the fingers of one hand, and almost all are the work of Civil Society organisations rather than the Russian state. There is an argument for saying that removing these monuments – rather than, say, leaving Dzerzhinskii standing (or better still, lying flat on his face) but erecting a memorial to his victims alongside him – has facilitated a convenient process of amnesia. Certainly the much more thorough process of symbolic De-Sovietisation in Ukraine has proved divisive and done nothing to solve the country’s problems.
In Central Asia monuments erected under Russian or Soviet rule are reminders not just of an ideologically

Monument to Governor-General Konstantin Petrovich von Kaufman and those who fell in the capture of Tashkent (1913).

troublesome past, but of one which – as with Rhodes – is colonial. The Tsarist period saw the construction of a whole series of monuments commemorating key moments in the Russian conquest of Central Asia, such as the battle of Iqan in 1864, the fall of Tashkent in 1865, and the massacre of the Turkmen at Gök-Tepe in 1881. All of these were destroyed by the Bolsheviks after 1917. Perhaps the most symbolic site was the central square of Russian Tashkent, where after thirty years of wrangling a memorial to the soldiers who fell while capturing the city in 1865 and the first Turkestan Governor-General, Konstantin Petrovich von Kaufman, was erected in 1913, only to be torn down just six years later. After various temporary installations a statue of Stalin was erected in the late 1940s, taken down in 1961, and then replaced with one of Karl Marx in 1968. This was then replaced with the current equestrian statue of Amir Timur (after whom the square is now named) in 1993.
So far as I know the only Tsarist-era military monuments surviving in Central Asia are a small memorial to soldiers who died of cholera in 1878 near the village of Jam in Uzbekistan’s Zarafshan valley; and the memorial to the battle of Uzun-Agach, in which Russian forces defeated those of the khanate of Khoqand near modern-day Almaty in 1860. The former is obscure and was probably just overlooked; the latter was partly dismantled in 1921, but seems to have become a symbol of identity for Russian settlers in Semirechie, and by the 1950s could be portrayed in a Soviet film as a sign of homecoming for soldiers, Russian and Kazakh, returning to the region after the First World War. It has recently been carefully restored. Apart from these the memorial to the explorer Nikolai Przheval’skii still stands near Karakol in Kyrgyzstan [see image above]. Przheval’skii is in some ways a comparable figure to Rhodes, a champion of Russian imperial expansion with distinctly racist views, but he was considered ‘progressive’ by the Soviet regime because of his contributions to geography and his monument was thus left in situ. Today the darker sides of Przheval’skii’s career are largely forgotten, and monument has become a site for wedding photographs and an object of local pride.
The pattern of preservation for Soviet monuments varies much more widely. Uzbekistan and Kazakhstan 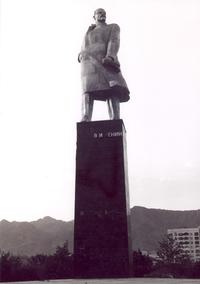 have removed most of the Lenins that once adorned the urban spaces of Tashkent, Alma-Ata and other large cities, although less easily removable iconography such as mosaics and murals often survive, and are increasingly appreciated for their artistic value. When I first visited Khujand in Tajikistan in 2003, a gigantic Lenin still towered over the city from the heights overlooking the Syr-Darya, reminding one of its Soviet-era name of Leninabad. This has now been replaced with the figure of Tajikistan’s new national icon Ismoil Somoni, but Lenin still stands in a more modest position on the riverbank. In Bishkek a modern monument to Qurmanjan Dadkhwah, the remarkable ‘Queen of the Alai’ who is a Kyrgyz national icon, stands in the same park as an early Bolshevik monument commemorating the Red Army men who died during the reconquest of the region under Mikhail Frunze, a European settler from what was then called Pishpek.
It is often in smaller, less-visited places that Soviet-era monuments survive in Central Asia: perhaps the most poignant I have seen anywhere is a small concrete Lenin in the village of Tonkoshurovka in northern Kazakhstan. The 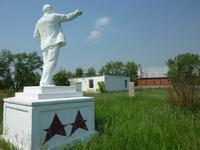 inscription on the base records that it was erected on what was then ‘Kolkhoz Frieden’ in the summer of 1940 – the name provides the clue that this was a settlement of Volga Germans, thousands more of whom would be deported to Northern Kazakhstan the following year when Hitler invaded the USSR. Still freshly whitewashed and now incongruously gesturing at a Catholic Church erected in the 1990s, it commemorates a period of terrible suffering and a vanished community – most of Tonkoshurovka’s German inhabitants have emigrated in the last twenty years – giving it a contemporary meaning which has little to do with Lenin as a historical personage, let alone the ideology he represents.
As this suggests, it is not true that statues always continue to honour their subjects or retain the same meaning for onlookers that their creators intended when they were first erected. The great Panfilov war memorial next to the Ascension cathedral in Almaty was built during the Brezhnev era to honour an event which never happened – the heroic resistance of the 28 Panfilov guardsmen during the defence of Moscow against the Nazis. This was a Stalin-era myth which has long been exploded – some of the men commemorated were actually still alive when the monument was erected in 1976 – it is a deliberate historical falsification transmuted into bronze and marble. But the meaning attached to the monument by Almatintsy today is not bound or tainted by these origins. It reflects a continuing and justified pride in the role played by all Soviet citizens – not just ethnic Russians – in the defeat of the Nazis. And as with war memorials all over the former Soviet Union it is a site where major life events are marked - above all weddings – with toasts and family photographs.
If destroying monuments can lead to forgetting, there are ways of leaving them in situ that simultaneously preserve their historical significance and contextualise it for the present day. One of the most effective examples comes from another colonial setting, the Residency at Lucknow in Northern India, site of a major siege during the rebellion of 1857. A huge complex of ruins, memorials and graves, it was maintained by the British as a shrine to what they saw as the heroism and sacrifice that built the Raj. After Indian independence it was left intact, but the Government of India erected a memorial of their own to commemorate the Indian rebels who were killed, pointing out that those referred to as ‘mutineers’ elsewhere on the site were now seen as patriots. To take a Central Asian parallel, imagine Amir Timur Maydani in Tashkent adorned with the 1913 monument to von Kaufman, the 1968 monument to Marx and the modern statue of Amir Timur. It would be an accurate reflection of the forces that have made the modern city what it is – Russian colonialism, Communism and modern Uzbek nationalism.
Mary Beard has suggested that a line has to be drawn somewhere, which presents a challenge both to those who want to topple statues and those who want to preserve them. Statues of Stalin, given the extraordinary cruelty he represents, and their potential to be used as contemporary political rallying points, probably fall on the far side of it; so too for similar reasons would those of Confederate Generals in the Southern United States. The erection of a new monument to the butcher of Gök-Tepe, General Mikhail Dmitr’evich Skobelev on Moscow’s Vernadskii Prospekt in 2014 is further evidence of Russia’s denial of its colonial past, and a revived cult of the so-called ‘White General’. Arguably though the removal of his original 1912 monument on Tverskaya street by the Bolsheviks was what facilitated this amnesia in the first place.
Many believe the Rhodes statue in Oxford also falls beyond that line - however there is no cult of Rhodes in Oxford today. Some view his statue with hatred and disgust, some with embarrassment, some as a necessary reminder of Oxford’s role in the British Empire and of where much of the University’s wealth actually came from, and the majority with indifference because they have no idea who he was. Taking the statue down might ease the first two of these, but in the long term could make it easier to forget the uncomfortable legacies of Empire. It is also reminiscent of the Bolshevik attitude to the past, which demands that present regimes and orthodoxies have an ideological monopoly over our public spaces. In the end monuments are inanimate objects - they have no agency beyond what the societies and communities within which they stand can give them. And it is best if local communities and civil society rather than governments make the decision as to whether they should continue to stand.