Some Thoughts about Women, Cameras and the British Empire

Dr Janice Kinory is Research Associate at the Heir Project based at the Institute of Archaeology Archive at the University of Oxford. She is one of the curators of the Women and the Camera Exhibition featured in Photo Oxford 2020. the Exhibition can be viewed here. 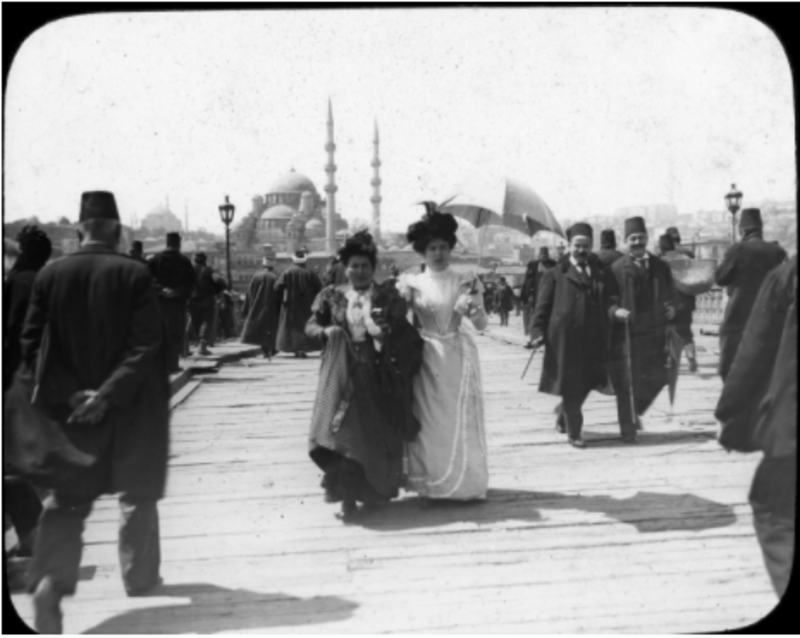 The HEIR (Historic Environment Image Resource) Project digital image archive is a collection of more than 32,000 pictures that come from technologically obsolete teaching collections previously used in a number of departments of the University of Oxford and private collections that complement the university images. Based at the archive of the School of Archaeology, the pictures include historic buildings and places, images taken during travel and excavations, artworks, archaeological artefacts, drawings, maps and other lecture illustrations. The pictures date as far back as 1860, though most are after 1880, and span the globe with a particular emphasis on the classical world and the former British Empire countries.

People in the pictures were often considered irrelevant to the “true” subject of these images, mere props holding an object of interest or intrusive, possibly lured by the rare excitement of a photographer at work. Yet our modern eyes find those long-gone individuals of great interest, sometimes more so than the official subject of the view. If you look deeply, you find details about the world these people lived in as well as insight into the mind of the photographer. With the long exposure times of the early images, none of these pictures are the casual snapshots so common now.

With travel difficult and expensive, for most British people their views of the empire came from written sources and photographs. For that reason, empire photos are not neutral. They served to underpin the supposed “civilising” mission of the empire. They often emphasized how unlike the British the empire’s other citizens were. The University of Oxford was a central part of the network producing colonial administrators and technical experts for the empire. Pictures used as part of the university’s teaching material formed part of the basis for the conscious and unconscious biases of these future colonial administrators and their future decisions and actions.

In early 2020 the writer learned that the Photo Oxford 2020 exhibition was planning to focus on a century of women as matriculated students in the university. With thousands of images in the collection, I volunteered to put together a presentation about university women using HEIR images. It came as a bit of a surprise when trying to assemble the presentation that it became obvious the collection had very few images showing women known to be either university staff or students. Even the pictures from St Hugh’s College, formerly one of the four women’s colleges within the university, had provided only two images of women, and one of these was a major donor rather than a student. Yet there were thousands of photographs of women in the collection and a large group which were taken by women.

The presentation then morphed into a wider view of women’s relationship with cameras. The teaching images in HEIR from the former colonies provide a contemporary view of the empire designed to prepare young men for their overseas tasks. The early pictures come from a time when the British empire, sexism, the class system, racism and white privilege were accepted without challenge by those benefiting from the system, the same people who could afford foreign travel and cameras. These unchallenged assumptions inevitably impacted the selection of photographic subjects, the framing of images and their interpretation as teaching materials. How are these assumptions reflected in the pictures of the “Women and the Camera” exhibition?

Of the pictures selected for the exhibition, 22 show women in former colonial countries. Most of these show local women, often pictured in exotic clothing or in stereotypical activities. Many of the images show these women performing heavy, physical labour. This is also the case for women photographed

in the former colonies of France, Italy or the Ottoman Empire, also part of this exhibition. Their “otherness” is one of the main messages conveyed by the pictures in the teaching collections. The few exhibition images of white women in the colonies show them either relaxing or, in a single instance, in a leadership role over local women. This was a subtle message to the students about the appropriate lives that their colonial wives were to lead.

It is virtually impossible to separate these two characteristics in the images of the exhibition covering multiple cultures and a time span of roughly 170 years. The sections “Women in Front of the Camera”, “Women’s Work” and “Women on Holiday” illustrate the great variation in the socially defined parameters for the proper behaviour of women at any point in time since the mid-19th century. Some women were expected to be passive, even decorative, while at the same moment others toiled in fields with hand tools. However, there is a discernible pattern in the pictures: the more strenuous the task portrayed, the more likely that the woman or women were of colour. For European women, the images show new activities becoming possible as time passes. For example, in the field of archaeology, we see a woman used as a passive model of recently discovered ancient jewellery in an image from 1873, women watching an excavation by men in 1924 and, finally, a woman involved in excavating a site in the 1950s.

Until the advent of the Brownie camera in 1900, photography was a hobby that was limited to the wealthy. Even after that date, the cost of getting photographs printed limited access to personal images to a small segment of the population. The early images show upper class women in immaculate, elaborate attire including hats and gloves even when travelling abroad. One wonders if their unseen maids travelled with them to tend to their wardrobes so they could appear well turned out as they walked serenely or sat at the locations visited on their holidays, usually ones related to the interests of their university professor spouse. Early pictures of middle- and lower-class women show a different world, one of hard work, humble clothing and varying degrees of poverty. This latter group of pictures is not particularly sympathetic to the harsh conditions shown. The viewpoint is ethnographic, a catalogue of how things are done differently elsewhere, not a social critique and rallying cry to make the world a better, more equal place.

With many photographers being from the wealthier strata of society, it is their images that also show the gradual widening of the world for women in this class. Travelling clothes become more practical and more arduous adventures involving bicycling, horseback rides, volcano visits and glacier treks become possible. Pictures of park visits and seaside holiday views show similar changes for less prosperous women as well. By the end of the First World War, the world is a much wider, more accessible space for many women found in the HEIR archive.

Although often perceived as a 21st century phrase, it originated much earlier. For example, in 1936 E A Walker used the phrase in his essay on South African history. He comments on the motivation for the mass migration of Afrikaners from the Cape Colony in the 19th century: "It was primarily land hunger and a determination to uphold white privilege (my emphasis) that drove the Trekkers out of the colony in their hundreds to seek security and satisfaction in independence (Walker 322)"1.

The idea that white people were superior to those of colour was an accepted belief among most Europeans long before the advent of photography, so it influenced photographs without formal

discussion of the topic at the time. It can be seen in the self-assured faces of the two European women crossing the Galata Bridge in Constantinople, the only women visible in a picture probably taken by their male European companion. They appear free to venture where no Turkish woman can. Pictures taken by colonial administrators were shaped by this pervasive concept. We can glimpse white privilege in the image from the Cayman Islands where British women in white uniforms walk separately from their dark-uniformed and dark-skinned female companions. It also shows in an image from pre-independence India of a British woman fly fishing while a barefoot local man sitting on a rock looks on, possibly the person who carried her equipment to the river. There is no sense in the pictures that there may be questions being asked about the appropriateness of these arrangements by the non-Europeans in the photos. It is, however, a question that is be asked in the 21st century when the empire is viewed from multiple perspectives.

As often happens when the writer spends time looking at the images of women in the HEIR Project digital image archive, she is overwhelmed with thoughts about her good fortune to have been born in a time and place where she was allowed to go to school, work in any job she chose and never had to engage in back-breaking labour she didn’t volunteer to perform. I would like to thank Photo Oxford and the Oxford and Empire Project for giving me the opportunity to share the many lives of women with a wider audience. My appreciation also goes to Dr Sally Crawford, Dr Katharina Ulmschneider, Prof Amy Bogaard, Dr Erica Charters, Danielle Battigelli, Haley Drolet and anyone I have failed to mention but should have who helped me put the “Women and the Camera” exhibition together.