William Poole, Tutor in English and Fellow Librarian at New College Oxford, outlines how Oxford was the site of the first documented encounter between an English scholar and a Chinese scholar.  You can also read more on Shen Fuzong here. 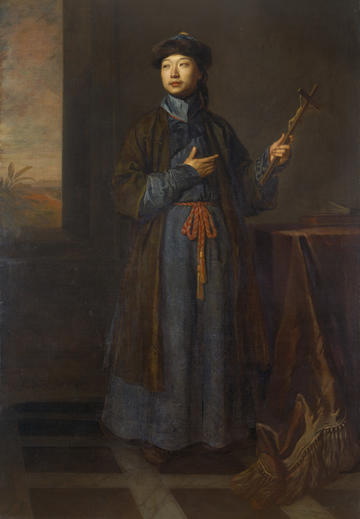 The first documented encounter between an English and a Chinese scholar took place in the Summer of 1687 in Oxford. Shen Fuzong, a native of Nanjing and the child of Christian converts, had been brought to Europe by Jesuit missionaries to help them promote the China Mission. Shen was accordingly introduced to Western leaders, including the Pope and the French king, to whom he demonstrated the kow-tow and the use of chopsticks. In these years, the English king, James II, was Roman Catholic too, and this window of toleration granted the Jesuits a rare opportunity to carry their mission across the Channel. So Shen was brought to meet James II, and soon also received an invitation from Bodley’s librarian Thomas Hyde to spend a summer in Oxford. There, they would converse—in Latin, which Shen had been taught on the boat from China—about China and Chinese matters, and Shen would help Hyde catalogue the many books in Chinese script the library had already acquired, but which no-one could read. After Shen left Oxford, he continued to correspond with Hyde, and Hyde started to gear all his subsequent publications to include the unique information he had acquired from his encounter with Shen. Shen himself did not survive the return trip to China.

The first of these publications was Hyde’s short Latin Epistola de mensuris et ponderibus Serum seu Sinensium (‘Letter on the Measures and Weights of the Seres or Chinese’), printed in Oxford in 1688. This has some claim to be the first proper text in English Sinology, insofar as it is based on informed access to genuine Chinese sources, and is not simply a rehash of material taken at second hand from the missionary or mercantile accounts of other nations.

It also features engravings of Chinese characters taken directly from Shen’s own hand. This is the text that first introduced me to Shen, about whom Hyde wrote warmly, and which prompted me learn about their encounter. I had long been fascinated by Hyde, the foremost orientalist of his day in England, more at home in Hebrew, Arabic, Persian, or Turkish than in the distant and graphically mysterious Chinese, but he was arguably the first English person to gain some real insight into that last language.

My edition and translation of Hyde’s Epistola de mensuris et ponderibus Serum seu Sinensium is a celebration of this complex encounter, one which in its balancing of affinity and difference, is particularly resonant today.

Hyde’s Epistola is in some ways quite a dry text: a lot of numbers and comparisons, albeit enlivened by discussions of the Great Wall, of tea, of Chinese New Year, and by some interesting comparisons with Islamic materials. But it has two features of lasting significance for the historian of intercultural encounters. The first is that Hyde, a Protestant scholar, considered that his access not only to Shen’s native testimony, but also to some indigenous Chinese maps recently acquired by the Bodleian, rendered his judgement superior to that of the Jesuit missionaries, despite all their field experience, because he could assess and balance a range of sources. Secondly, Hyde treated Chinese weights and measures, for all their cultural specificity, as still assimilable to the Western paradigms of scholarship with which Hyde felt comfortable.

Hyde and Shen evidently felt a great deal of mutual respect, to judge from their correspondence; but this was fundamentally a

meeting about finding common ground rather than celebrating difference, despite the ineluctable persistence of the latter. This aspiration is perhaps most lastingly captured in Sir Godfrey Kneller’s memorable portrait of Shen, painted at the request of James II, and traditionally known as ‘The Chinese Convert’, which can be read as a subtle piece of hopeful religious propaganda. In it we see Shen in recognisably oriental dress, but holding a crucifix in his left hand while he looks up to the right and into a source of light, suggesting the One Catholic Truth available to all, East and West. Shortly after Shen’s meeting with Hyde, James II was effectively deposed by his Protestant subjects.

Images: portrait of Shen, image of Shen’s signature and greeting to Hyde, portrait of Hyde.